Anson Reign began performing in Phoenix, Arizona in 2007 "by accident", as he likes to say. An acquaintance was putting on her first drag king show when she unexpectedly had 2 performers drop out the night before the show. She sent out a plea for assistance on Myspace and Anson - who grew up as an actor and a singer all his life - thought, "Why not?" and Anson Reign was born. 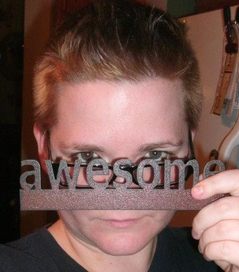 Growing up in Staten Island, New York, Dana claims no relationship to "The Situation", but has many fond memories of family trips to the Jersey Shore before it was taken over by the mafia. Of which there is no such thing...

Dana attended P.S. 32 and I.S. 75 in Staten Island before moving to Tucson with her family in 1994, where she attended Sabino High School, spending nearly all of her time in the Fine Arts building. Technically, she still has no idea how she graduated. After high school Dana returned to NY to attend The American Musical and Dramatic Academy where she studied Musical Theater and Binge Drinking. Bouncing back and forth between AZ and NY over the following few years, Dana spent time in NY working Publicity and Marketing for off-Broadway shows such as "Boobs - the Musical", and "The Perfect Crime." She also worked for the esteemed Comic Strip Live and the New York Comedy Club. In Arizona, Dana worked as the Publicity Director for the Irish cafe and theater, Wilde Playhouse, and began to create her own production company: Scorpio Productions which has grown into "Reign Productions."
Dana blames her interest in comedy on her father allowing her to watch movies such as Blazing Saddles, Clue, Abbott and Costello, Young Frankenstein, Noises Off, Silent Movie and other Mel Brooks films at a very young age. Dana still laughs when people fall down. Comedy and a natural sense of timing run through the Cianciotto family, making every holiday a giant Italian battle of wit with followed by espresso and Sambuca.

A result of this childhood issue, Dana now has the YouTube site: ThatFunnyLesbian. The site is still young, but has already received a decent number of hits and Dana looks forward to continuing to build it. At this point the videos are mostly related to Musical Mayhem Tucson - more information to follow on that...

She also created comedy improv troupe Not Burnt Out Just Unscrewed in Tucson, Arizona, in May of 2002. NBOJU, as it is affectionately called, is celebrating it's 10 year anniversary this year and still running strong. A short form troupe that delves into long form on occasion, you can find more information at www.unscrewedcomedy.com. While living in Phoenix, Dana also played with comedy improv troupes The Originals, Light Rail Pirates, and S'marmalade, and performed in the Phoenix Improv Festival in 2007.

The Other Big Thing

Click here to visit Musical Mayhem Tucson
Aside from performing as a Male Illusionist, Anson's biggest passion is musical theater. Anson is the creator and Artistic Director of both Musical Mayhem Cabaret in Phoenix, and Musical Mayhem Tucson in Tucson. Both are hilarious musical comedy troupes comprised of very talented singers and comedians, and you can find out much more about them by clicking the image to the right! And just so you know - Musical Mayhem is available for bookings across the country as well... 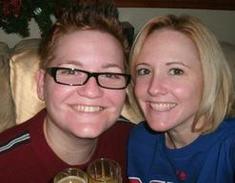 Donnie and his girlfriend Erin
Does Anson take hormones or has he had any surgeries? As of June 2012, Anson began testosterone therapy. Prior to that, he was not on hormones and he has had no surgeries. Anson is in the processing of legally changing his name from "Dana" to "Donnie."

Is Anson single? No. Anson lives in Tucson with his beautiful girlfriends... ;)

Where did the name "Anson Reign" come from? Donnie had a friend named "Anson" in high school, and always thought it was a pretty sweet name. He knew he didn't want something shticky or too comedic, but he did want something "kingly." He was also a fan of the name "Rainn." If you spelled Rainn as "Reign" - well, that's what a King does, so he ended up as Anson Reign.

Those are really the only 2 important questions we can think of at the moment. Do you have any?